El Salvador made headlines this week after it became the first country in the world to declare bitcoin as legal tender. The Central American country’s congress passed the bitcoin bill proposed by President Nayib Bukele on Thursday by a “supermajority”. The BTC price rose shortly after the vote, climbing 5% to $34,239.

Following the ratification of El Salvador’s bill into law, volume outflows from bitcoin OTC desks, a solid indicator of institutional buy interest, have been surging.

The data below from on-chain analytics platform glassnode highlights the spike, showing that the move by El Salvador to recognize bitcoin as it viewed legal tender in a positive light by institutional allocators. 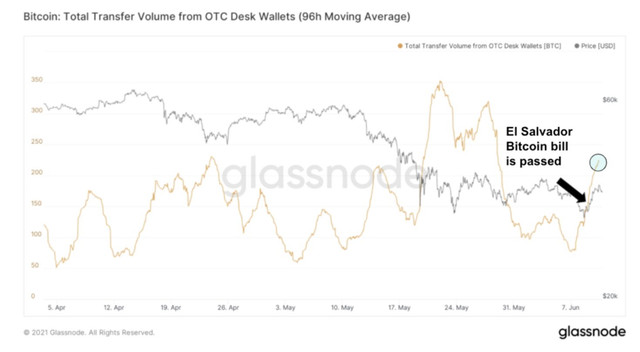 The use of the flagship cryptocurrency as legal tender is set to begin in 90 days. Per the new law, the BTC/USD exchange rate will be set by the market.

According to Bukele, the use of BTC in the country will be optional for residents. The government has guaranteed that users can convert their digital coins to dollars at the time of transaction.

The president believes that the new currency holds the key to solving his country’s low banking penetration and will reduce the cost of sending remittances.

Some hailed El Salvadors’ decision to onboard a non-fiat currency in the crypto community, legitimizing the nascent asset class. Many residents of El Salvador’s capital, San Salvador, were also excited by the new currency and hoped it would increase financial inclusion and bring prosperity.

Under the new law, businesses must accept bitcoin as payment for goods and services. Prices can also be shown in BTC, and it can now pay tax contributions in the cryptocurrency. Moreover, exchanges dealing in bitcoin won’t be required to pay capital gains tax.

“The purpose of this law is to regulate bitcoin as unrestricted legal tender with liberating power, unlimited in any transaction, and to any title that public or private natural or legal persons require carrying out,” an excerpt from the law states.

Jack Mallers, founder of payments platform Strike, has been working with Bukele to determine the logistics of embracing bitcoin as legal tender. He hailed the historic move toward banking the over 70% of the population of El Salvador, which lacks access to traditional financial services.

Officials in the Central American state will start rolling out the training and mechanisms necessary to facilitate the population to access BTC transactions.

El Salvador Gets Pushback from Regulators

The International Monetary Fund (IMF) warns that El Salvador’s decision to adopt bitcoin as legal tender is risky. Gerry Rice, an IMF official, stated on Thursday that the move would imply a series of risks and regulatory issues.

“Crypto-assets can pose significant risks, and effective regulatory measures are essential when dealing with them,” Rice emphasized.

The international financial authority is reportedly monitoring the situation in the Latin American country closely.

Fantastec Partners With Dapper Labs...
Today, fantastic, a startup based in London, revealed that it has partnered with Dapper...