On March 13, 2020, Bloomberg reported that miners whose computers make the BTC network operational are facing deep cuts to profits.

With Bitcoin’s price down almost 40% this month, so-called miners whose computers provide a 3rd of all the power for the network, have gone into the red, according to Chris Bendiksen, head of research at digital-asset manager CoinShares. 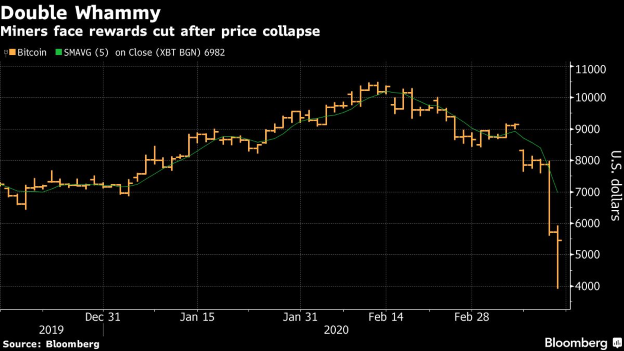 March 12 has become ‘Black Thursday’ on crypto Twitter after Bitcoin plunged around 40 percent that day and reached a bottom in the $3,900 area. Since then, the flagship currency has recovered some of its losses and is now trading in the $5, 500 zone.

The drastic decline couldn’t have come at a worse time, as in May, rewards issued to miners will automatically drop in half, further aggravating losses unless the price rallies soon.

For many years, the regularly scheduled BTC halvings have been looked forward to with many investors claiming that the digital coin rallies right before and after them. Thus far, in 2020, these prospects have proved to be untrue.

He states that at present, the cost of electricity for mining BTC is higher than the value of 1 coin. According to his projection, the current situation is unsustainable, and some miners may start switching off their computers. 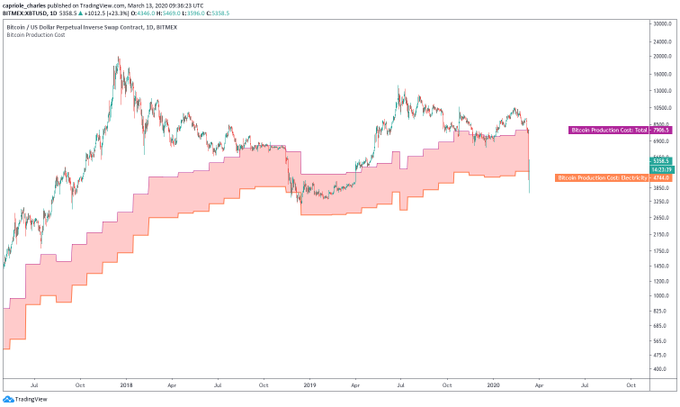 Similarly, the founder of Quantum Economics, Mati Greenspan, has projected that certainly, some miners will leave, and the hash rate will go down if prices remain below the $5,500 level. However, he says that new people will quickly take their place and begin verifying transactions on the BTC chain.

Since miners usually sell a portion of Bitcoins they receive as rewards to cover operating costs, their financial miseries could potentially put more pressure on the price.

When miners expect the price to rally, they often keep a larger portion of their earnings in BTC. In a down market, miners often choose to increase their BTC sales, flooding the market.

Chris Bendiksen, head of research at CoinShares, believes that Bitcoin’s price has to be around $7,400 for an average miner to be profitable, and miner becomes cash-flow negative around $4,500.

That said, most miners are unlikely to shut down their operations immediately as expectations for a BTC rally in the coming weeks are still high.

Nonetheless, if prices don’t go up, many miners will likely close up shop after the halving takes place in May 2020.

Binance Is Set to Roll Out Its First...
Crypto exchange giant, Binance is preparing to roll out its own crypto mining pool....